Increased Accessibility of Resources and Opportunities

One of the major challenges in urban slums have been access to resources and opportunities for the urban poor. Although there are several schemes for the urban poor, yet it is not accessible to them due to lower awareness and dissemination of information on part of the services provider as well as the receiver. The programs developed and implemented by government are often not able to reach to the neediest. Program, opportunities and resources are relatively easier accessed by the relatively better off groups among slum dwellers. Access to basic social services is very limited among urban slum dwellers resulting in limiting real time impact on the poor population. Families living in urban slum areas lack access to essentials such as water and sanitation, health services, quality education and income generation opportunities. Many of them suffer from poor hygienic practices, malnutrition and food insecurity. HBT has been striving hard to ensure increased availability of resources and services to the urban poor particularly the children, youth and women.

6 street vendors of Adeikhal -A community of Bhubaneswar are linked under PM SVANidhi scheme. Under this scheme, the vendors will get Rs 10,000 loan with 7 percent interest from any scheduled commercial bank, microfinance institution, small finance bank, rural bank, and co-operative bank without any collateral for a tenure of one year. 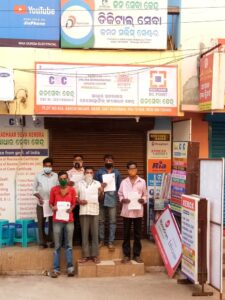