As the response to the massive disaster happened by FANI, HBT started its intervention through a strategic framework. The short and long term plan of actions were designed for the preparedness and restoration measures and HBT team and the volunteers worked in close coordination with communities, local governments and other voluntary organizations.
FANI Preparedness Activities:
HBT consistently monitored the situation since the Indian Metrological Department (IMD) forecasted about the cyclone and initiated the preparedness measures to help communities prevent loss of life, damage to health, well-being and livelihoods and to minimize property damage. The preparedness activities include
Orientation of volunteers: More than hundred volunteers including the youth peer leaders, Sambhavi women leaders and other community volunteers were oriented on how to conduct the evacuation process and about their roles & responsibilities to face the disaster. These trained ‘Humanitarian Community Leaders’ delivered essential services required in rescue and rehabilitation process at the onset of cyclone.
Community Preparedness Meetings: Community meetings were conducted to ensure that vulnerable communities have the knowledge and understanding of the hazards and risks, in order to take appropriate actions to save lives, protect properties and the environment. They were made aware about the Do’s and Don’ts to be followed before, during and after the cyclone.
Facilitating Mass Evacuation Process: The evacuation process started 48 hours before the cyclone showed its effect and the process covered the communities of 12 different wards of Bhubaneswar Municipal Corporation and from the villages of Astaranga and Kakatpur panchayats of Puri district. The most vulnerable groups such as children, women, elderly people and persons with disabilities were shifted to shelter homes and advanced stage pregnant women, newly born infants were moved to the maternity care units.
Immediate Response Activities:
Rapid Assessment: A rapid assessment was conducted immediately after the onset of cyclone FANI in order to assess the loss and the immediate needs of affected people. A 4 days long assessment was done in 122 communities of Bhubaneswar, 40 communities in Cuttack, 40 communities in Puri town and in 4 panchayats of Puri rural areas. In the urban slums, loss of Infrastructure services, loss of basic amenities, loss of livelihood sources, loss of Access to resources, loss of Health & Education services etc were assessed and in rural areas standing crop damage, loss of Livestock, loss of Infrastructure services, loss of Livelihood sources, loss of access to resources were mapped out. The assessment findings with action needed reports were submitted to respective district administrations and State Disaster Management Authority.
Cleanliness Drives: Following the disaster, environmental cleanliness became the paramount concern in order to avoid the consequences of diseases. HBT took up cleanliness drives across the operational areas mobilizing the support of volunteers from the respective communities. The cleanliness drives undertaken immediately after the cyclone were able to eliminate the debris getting rotten, water sources getting contaminated and resume the disrupted communication. Electricity also started resuming in different parts of the city with clearances of branches and trees fallen down that were obstructing the route. Water tanker and other essential services could reach to the affected population after the communities were set obstruction free. Cleanliness of drinking water sources and the water loggings were done regularly with the support of community volunteers to prevent the outbreak of epidemics.
Relief in form of Food & Drinking Water: Responding to the critical needs of food and drinking water requirements of the cyclone hit communities; dry food materials and cooked food were provided in the urban slums of Puri and Bhubaneswar reaching out to 750 households. With the support of Bhubaneswar Municipal Corporation drinking water tankers were made available in the communities for people to have access to safe drinking water. Our adolescent group leaders of Bhubaneswar also organized ‘Jalchatris (water distribution sheds) in different communities to distribute drinking water to the passerby.
Relief Kit for Elderly: To support some elderly people, a small girl contributed her piggy bank deposit money and the donation was utilized in giving relief kits to 9 elderly people who had lost their houses. The relief kit was containing 2 sets of dresses and some basic hygiene products.
Emergency Shelters for Women & Children: The cyclone-ravaged communities lying on the sea belt of Puri were sizzled under intense heat wave as their houses were completely damaged. Women and girls had to sleep under open sky, no privacy to change cloth; children were roaming around in the hot sand without slippers. HBT took up a unique attempt of setting up of a temporary shelter at Baliapanda community of Puri to address the instant need of women and children using the cast off materials of the cyclone such as broken bamboos and polythene sheets and the dried coconut leaves. HBT volunteers constructed a shelter unit from the scratch. Our endeavor was a way forward for the district administration, Puri and State Relief Commission (SRC), Government of Odisha to support us with tents and thus temporary shelter homes named as “Sambhavi Gruha” were established in 23 coastal communities of Puri catering to needs of more than 500 women and girls and 700 children. 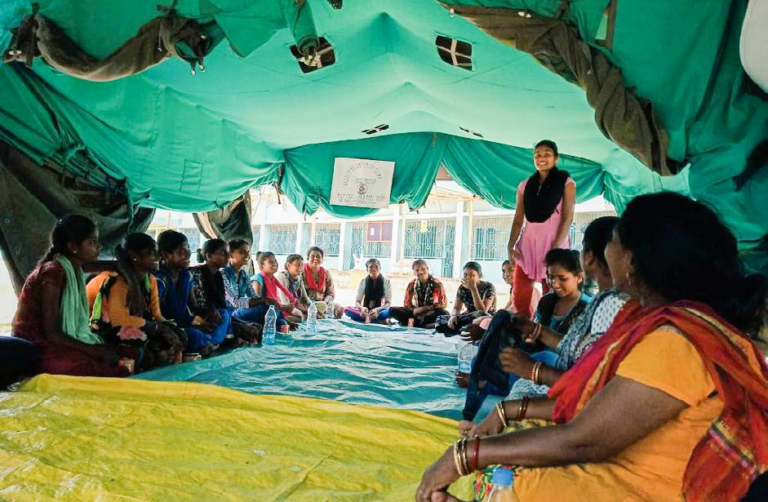 Lighting up the Dark Places: The cyclone-hit communities were without electricity for more than a month period and it became unsafe for people after the sunset 20 Aska’s Mobile Light Towers were fixed up in different places with support of Puri district administration to lighten up the dark places.
Restoration & Resilience Building Activities
Rebuilding of Houses & Community Infrastructures: 60 volunteers (HBT youth peer leaders) in the eight Bhubaneswar Town Centre District (BTCD) area set an example of leadership by giving support to the people in rebuilding their houses in the communities. Community infrastructures were severely damaged by the cyclone hit and the residents had no or little access to basic infrastructure facilities. We facilitated the Sambhavi women leaders and child leaders to prioritize their basic requirements and accordingly submitted the Charters of Demands (COD) for the reconstruction or repair of the community infrastructures in Puri and Bhubaneswar. To assess the damages made to Anganwadi centres and its facilities, a survey was conducted of 80 Anganwadi centres of Puri municipal area. The assessment findings and required construction and repair needs were reported to district administration, Puri.
Building Cadre of Psychosocial Counselors: Cyclone FANI resulted in deaths and injuries, damages and destructions, which were visible. What not so visible were the mental agony, trauma and stress of the survivors who have suffered losses in different forms. Since our state has become most prone to natural disasters, as a process of community resilience building, it was thought to build the capacity of humanitarian volunteers to address the mental health issues in the aftermath of disaster. To prepare a cadre of community level psychosocial counselors, a two days capacity building program was conducted where 26 young volunteers were trained on community based psychosocial care in disaster management, different mental health needs of the survivors of different age groups and the first-aid techniques of psychosocial care by expert mental health counselors of NIMHANS. The program was supported by UNFPA, UNICEF and Bhubaneswar Smart City Limited (BSCL).